To celebrate my 50th birthday in May, my husband David and I joined up with our friend Tillie to visit London, Leeds, and Haworth, the home of the Brontë family. Our itinerary included mostly bookish places—bookstores, libraries, and the pièce de résistance, a private tour at the Brontë Parsonage Museum in Haworth. I have so many photos, I’ve had to break our adventures up into four part.

Welcome to part one: In which our heroes shop for books, dine at high tea, and take in a performance of Hamilton.

On May 7, to be exact, we flew to London and met our dear friend Tillie at the airport. It felt so glamorous to say, “See you at Heathrow!” and it was so much fun to see her walk through the gate. Then we took a train (crowded!) to our hotel, and then a double-decker bus (thrilling!) to meet another dear friend for cocktails.

This was the view from the bus—can you believe this brilliantly clear blue sky in London?! 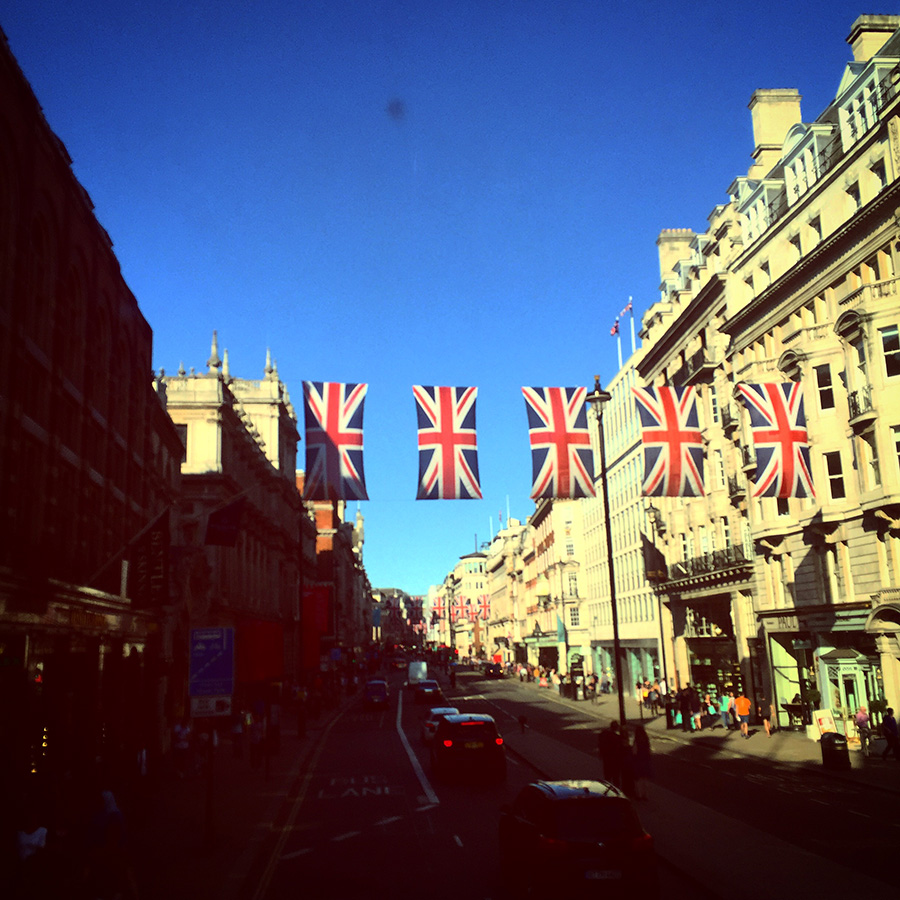 We had fancy cocktails in a blessedly cool, dark bar called The Escapologist. To protect the innocent, there are no photos from drinks or dinner that night, but I did snap a pic of my thoroughly decadent Toasted Popcorn Sour made with Jack Daniel’s Tennessee whiskey, popcorn syrup, fresh lemon juice, egg white, and popcorn. It was super weird and also super delicious. I watched the bartender torch the meringue on top, and I knew it was going to be good. At dinner, we talked about books and old times, and it was absolutely wonderful and restorative, then we took another double-decker bus ride (also thrilling!) back to our tiny-tiny hotel rooms and crashed out for the night.

Alas, none of us took photos at breakfast, which is a damn shame because we ate two mornings in a row at the thoroughly charming Cambridge Street Kitchen. According to my journal, I ate shakshuka (day 1) and a full English (day 2) with gluten-free toast and almond-milk lattes.

Then we made our first bookshop pilgrimage: Daunt Books in Marylebone.

I first learned about Daunt Books in this fascinating article about the British bookstore chain Waterstones, and when I learned that its full name is “Daunt Books for Travellers,” I knew we had to go. The window display is very inviting, no? And inside, there are lovely places to sit and browse through books. They have a gorgeous collection of Agatha Christies… …and handsome editions from the Everyman’s Library collection… …along with irresistible table displays. I bought the green one in the upper left corner—Writers as Readers: A Celebration of Virago Modern Classics. I was also seduced by Authors in Context: The Brontës and Charlotte: A Novel. That’s right! It was Day One, and I’d already added three books to my suitcase. This is the two-story room devoted to travel guides, as well as novels and memoirs set around the world. It’s arranged by destination, and it is heavenly. A collection of world literature… The Shadow Land, set in Bulgaria, is one of my favorite books! I have a weird compulsion to buy my favorite books when I see them out in the wild, but I resisted. For what it’s worth, I’ve also read Mendelssohn is on the Roof  and The Unbearable Lightness of Being. This table and I had a lot in common. Here’s a shelf of the travel guides… so colorful! When we were all bleary-eyed and booked out and ready for a sit-down with our new acquisitions, we headed out and stumbled on this shrine to Meghan and Harry. We were just one week away from the royal wedding, after all. After quiet time and a costume change, we headed to the Goring Hotel for Afternoon Tea. The Goring has been around for 108 years, and it is the plush drawing room of our dreams. I took very detailed notes in my journal; here’s an excerpt of my first impressions:

The door is watched over by at least three spiffily dressed gentlemen who welcomed us to the hotel, then handed us off to a very pretty hostess who showed us to our table. The room is so posh: crystal chandeliers, red and gold wallpaper, gilt-framed portraits. We sat at a small table bordered by a comfy couch—with leopard-print pillows, as if they knew I was coming—and leather club chairs. The china set was white and golden yellow, with gold filigree trim We decided on the Bollinger Tea which starts with a flute of champagne! We drank the Goring Afternoon Blend, a mix of darjeeling and assam, and our first course was an amuse bouche: pea purée with créme fraiche and a tiny cube of smoked salmon. It tasted like mashed potatoes with whipped cream and an ocean breeze. Let’s spy on David sipping his tea and take in the whole room. From my journal: A couple across the room left uneaten sandwiches and tarts on their plates! The tea consists of three courses: finger sandwiches, scones, and dessert tarts. We ate from the bottom up and were reminded several times that we could have more of anything we desired.

Our tower of treats included four types of finger sandwiches: ham and butter on wheat bread; cheese and onion on white bread; salmon, cucumber, and creme fraiche on wheat; and chicken, sundried tomato, and chive on white. They were all delicious, but the cheese and onion—grated cheese and grated onion mixed with mayo—was our favorite, and I’m not too embarrassed to say, we had seconds. On the second tier were our scones, plain and currant, still warm, and wrapped in a napkin to keep them that way. They were served with clotted cream, and both strawberry and raspberry jam. After about 90 minutes of eating, we finally arrived at the top tier, our dessert tarts. They are, from the left, lemon poppyseed with meringue, strawberry mousse on a butter cookie with strawberry crumble, pistachio-raspberry poundcake, blueberry poundcake with blueberry filling and candied blueberries, and a chocolate mousse tart with dark chocolate ganache, raspberry filling, chocolate crust, and chocolate crumbles. I carefully cut each tart into three equal pieces so we could all try everything.

My last bite was a bit of the chocolate mousse tart with a final sip of champagne. Perfection. THEN WE WENT TO HAMILTON! The pages I set aside in my journal to write about Hamilton are still blank because I cannot find the words. The closest I can come to describing it is that it was an out-of-body experience. I was in that show, not just watching it, and whew! the feels were real. The London cast—dare I say it!?—might have been even better than the original cast recording, although I feel so disloyal saying that because my love for the original soundtrack is a true love.

After the show, we stood outside the theater and watched the actors come out to sign autographs and pose for photos, but I was too shy. I did, however, burst into momentary tears while we all talked about how much we loved the show. I was pretend crying, imitating how I’d had tears in my eyes pretty much through the entire second act, when suddenly bam! I was full-on ugly crying on the sidewalk. It was fantastic.

The end… for now.

Words I never would have imagined myself saying before this year: I'm on my way to Warsaw to apply for my visa. To apply for...