… Dave and I went exploring at the Kotva department store. Its outside is rather famous because it’s a remarkable example of Communist era architecture. It has five floors above ground—comprised of hexagons that form a sort of honeycomb shape—and the whole schlemiel is interconnected by 10 escalators. The inside is unusual to us Americans because the “department store” is actually a collection of individual shops—clothing boutiques, a toy shop, a place to buy organic lotions, a handbag store, a gaming café—rather than the departments you’d expect in a store in the U.S. It’s like Macy’s and the Mall of America had a little baby.

Anyway, I bought some lovely hand lotion and tried on a fabulous faux fur leopard coat, but what really caught our attention was happening outside.

What happened to these gingerbread people?! I assumed it was the start of Christmas decorations, but I was only partially right.

It was the beginning of an art installation called The Anarchist Cookie Shop by Czech-Canadian artist Marek Schovanek. It’s a dark-Noel parody of the book The Anarchist Cookbook, a how-to manual for homemade weapons and drugs that was first published in 1971. We keep hearing from our Czech friends about the Czechs’ dark sense of humor, and this exhibit seems to be a pretty great example.

Is it wrong that I found so much of it to be really cute, too? (For a more thoughtful take on the exhibit, read this excellent piece by travel writer  and journalist Mark Baker.) 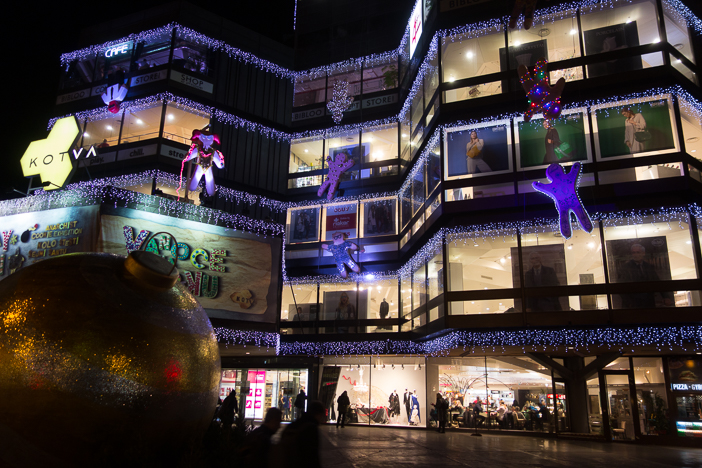 I would not complain if this silver-candy-covered skull somehow ended up in my living room. I mean, he’s not wrong: Sugar is a dangerous drug. At the bottom of one of the escalators, we found my perfect Christmas tree: all black with just a few white twinkle lights.

May 20 Posted byMelissa Joulwan
Dancing With Witches: A Story In Photos