In each issue of Paleo Magazine, I team up with Steph Gaudreau to share the history of a traditional recipe and adapt it to fit into a healthier paleo lifestyle. (I write the words; she makes the gorgeous photos.) In a previous column, we followed the trail of paprika from Mexico to the Ottoman Empire and the banks of the Danube River to discover the true taste of Hungary. 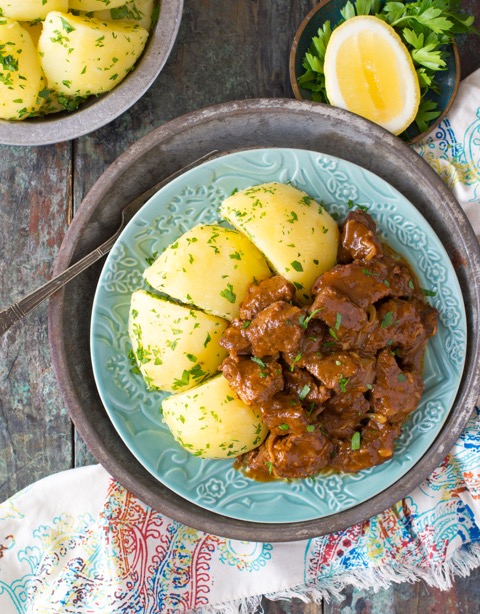 We Americans have gotten paprika and goulash all wrong.

Before I became infatuated with world cuisine, I thought paprika was just the red stuff you sprinkled on deviled eggs to give them a little color—and goulash was basically glorified Hamburger Helper, a soupy concoction of elbow macaroni, ground beef, and tomato sauce.

Then, in a pub almost hidden down a cobblestoned alley in a Medeival town, I ate a traditional goulash, made with wild boar that had been simmered until it fell apart into tender, bite-sized morsels. The sauce was richly seasoned with Hungarian paprika: delicate and fruity with a subtle smokiness and a mild bite at the back.

Paprika is made from air-dried chili peppers (Capsicum annuum, specifically), and it’s native to central Mexico. Thanks to the shenanigans of Spanish traders and Ottoman conquerors, paprika was eventually cultivated by Turks on the hills of Buda, now half of the Hungarian capital of Budapest. The climate and soil of Hungary, fed by the Danube River, produce paprika that is redder and sweeter than anywhere else in the world.

Paprika is used in traditional cuisines in countries across the globe—Morocco and other north African countries, Turkey, the Balkans, the Americas—to add flavor and color to rice dishes, stews, soups, and sausages. But no other dish better represents and defines paprika than Hungarian goulash.

From the Middle Ages until the 1800s, the grasslands in the southern and eastern parts of Hungary, known as the Puszta, were the home to substantial herds of cattle. Herdsmen known as gulyás drove the stock north and west to Venice, Nuremberg, and Vienna. Along the way, they nourished themselves with stew made from their beef, simmered with paprika, garlic, caraway seed, and bell peppers in a big pot over an open fire.

By the end of the 19th century, wars and politics led Hungarians to cling to their native Magyar traditions and goulash moved from the cattle drive to the dining room. This peasant dish became a sensation, and it’s popularity spread throughout the Austrian-Hungarian empire. Each culture added its own twist: In Italy, it’s served with polenta. In Czech and Slovak pubs, the goulash plate isn’t complete without dumplings. And here in the United States, the paprika was diminished and elbow macaroni was mixed in to create what’s sometimes known as slumgullion.

Our Paleo-friendly recipe is a Hungarian adaptation, and we’ve included tips for other variations. But before you can start cooking, you must get serious about paprika.

You probably have a tin or jar of paprika languishing in your spice cabinet right now. It may have a red-green-and-white Hungarian flag on the label, and you may have sprinkled it on a roast chicken recently. Sadly, your paprika must go. Toss it in the trash… now.

Before attempting this or any recipe with paprika as the star, you must buy a fresh supply of true Hungarian paprika. You owe it to yourself and the history of Magyar cuisine! All spices gradually lose their potency, but paprika is particularly vulnerable to the ravages of time. Fresh paprika will taste bright and sweet, like sunshine and adventure. (Feel free to replace the beef and pork listed in the recipe with wild boar if you’re fortunate enough to find it.) Start the meat. In a bowl, combine the arrowroot, salt, and pepper; add the beef and toss to coat the cubes. Melt the ghee in a large soup pot over medium heat. Add the beef in a single layer and cook until it has a nice crisp crust, about 10 minutes. Remove the beef from the pot and add the onions to the pot. Cook the onions, stirring frequently, until wilted, about 10 minutes. Add the paprika and caraway seeds and stir for 1 minute.

Braise the meat. Return the beef to the pot. Add 1/2 cup of the broth, stirring and scraping the bottom of the pot. Gradually stir in the remaining broth. Bring to a boil, then reduce heat to a slow simmer. Cover and cook until the beef is tender, about 1 1/2 hours.

Cook the potatoes. About 30 minutes before the goulash is finished simmering, place the potatoes in a saucepan with the salt and add enough water to just cover the potatoes. Bring to a boil, then simmer until tender, about 20 minutes. Drain the potatoes and return to the pan. Add the ghee and parsley; gently toss with a rubber spatula to coat the potatoes.

Big finish! Remove the lid from the goulash, stir in the lemon juice, and taste to see if the stew needs more salt and pepper. To serve, place potatoes and goulash in a bowl and top with additional parsley.

Austrian-style: add a fried egg to the top of each serving
Croatian-style: add porcini mushrooms before simmering
Czech-style: serve with thinly-sliced raw white onion
Hungarian variation: add sauerkraut to the goulash pot when you start the potatoes

In each issue of Paleo Magazine, I  share the history of a traditional recipe and adapt it to fit into a healthier paleo lifestyle. In this...