Our first half marathon

The official 3M Half Marathon race results are online. If you know someone who ran and want to look them up, you can do it here. My stats are below; Dave did AWESOME but we have a deal that I won’t divulge the details of his athletic achievements in my blog — couples’ confidentiality agreements and all that — but believe me: he killed it.

I can’t find the words to describe how happy I am to be “not last.” In the past, I spent a lot of time training by myself and participating in races way, way, WAY at the back of the pack. It’s lonely back there… leave lots of time to consort with monsters and think about quitting.

There’s zero shame involved with being a back-of-the-packer, and I was proud of my finishes. But man! I longed to be among the group of happy pack-finishers who were cheered by spectators along the course; who enjoyed the balloons at their fully-inflated, celebratory best; who had their choice of post-race banana chunks instead of taking whatever was leftover.

It was so great to be surrounded by other runners yesterday! And motivating, too. I just set my sights on someone in front of me and ran ’til I caught them — then I chose my next victim. There were a few times when my desire to catch the pink shirt or Hello Kitty backpack ahead of me was the only thing that prevented me from taking a walk break. Well… that and my enormous ego. Once I realized I was running sub-10-minute miles, I didn’t want to blow it. It was pure pride that carried me through the last three or four miles yesterday. I’m not sure that’s the most virtuous motivation, but it did keep me moving!

The Austin American-Statesman ran a story today about the fastest runners. The winner yesterday set a new course record! You can read all about it here.

News8 took the folksier approach and turned the spotlight on some tenacious back-of-the-packers (whom I still like to think of as “my people.”) Read that story here.

And here are my observations from firmly in the middle of the pack (hooray!):

It was cold, but not that cold.
We fretted and discussed and bargained and schemed and made an 8:45 p.m. run to Academy on Saturday night because the reality of 37-degrees hit home as we were prepping for the race. Turns out, the worrying was for naught; we were both perfectly comfortable during the run… or as comfortable as you can be when running 13.1 miles. In honor of the wintry temps, Dave got a swanky new fleece zip-up, and I decided to sacrifice by two-sizes-too-big Social Distortion hoodie alongside the course once I was sufficiently warm.

Here we are, bundled up and ready to go, before the race: 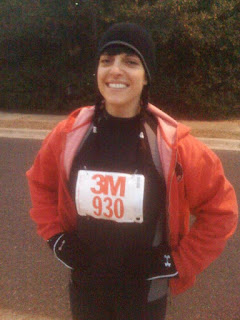 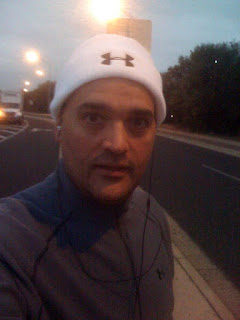 Walk break? Who needs a walk break?
During my training runs, I usually run 3 minutes, then walk 30 seconds until I’ve covered the distance. The walk breaks help a lot mentally and because CrossFit is so interval-focused, it makes even my longer runs mimic a CrossFit workout. But yesterday, I just didn’t want to stop — it felt too good to be running with all those other people. So I stretched the 3 minutes to 10 during the first half of the race. During my second 10k, my running intervals shortened to 5 minutes and finally to 3-minute intervals, but by then, the end was in sight.

Hey! It’s Joe!
I’ve lived in Austin since 2001, and I love the way it feels like my hometown now. I saw lots of people I know out on the course, and it was definitely a comfort. It started when I saw a girl wearing my exact cat burglar outfit: identical Under Armour black-and-gray turtleneck, black tights, black knit cap, black gloves. I joked, “Love your outfit!” as I ran past her (ahem!), then realized she was running alongside an old co-worker of mine that I haven’t seen in about 5 years. I was about a 1/4 mile away when I realized I should have asked about her baby — but it was too late. Right around the time I was making excited noises with her, I ran into my friend Stacey’s husband Joe. He’s faster than I am, so I was pretty excited about hanging with his pace for a while… until I had to take a walk break AND a bathroom break… bye-bye Joe! On the sidelines I saw fellow CrossFitter Amber and on Burnet, Nicole and Zac held signs and yelled nice and loud, across the street from CrossFit Central. When I didn’t see anyone I knew, I pretended the signs and cheers were for me. And to the pretty brunette who shouted at us, “Way to get out and make something of your Sunday!”… thank you so much. That sentiment carried me through some painful steps yesterday.

Shut up and run!
To the woman at mile 10-point-something that felt the need to carry on a cell phone conversation very loudly while running and surrounded by panting, striving, sweating, determined people… SHAME ON YOU. Next time, step to the curb to carry on your conversation. Or better yet: hang up and run! (I considered a well-timed body check but sadly realized that the half marathon course is NOT the Roller Derby rink.)

I can’t cry yet. I’m not at the finish line.
I saw lots of touching human interactions along the way: friends running together and clearly providing much-needed support… lone spectators and large groups holding up signs and screaming their heads off for a familiar face… volunteers making sure the cups of water and Gatorade made it safely into our hands… but my favorite came around mile 11 or so. A woman with a ponytail in blue and white was running just a head of me. We reached an intersection and a little girl — maybe 9 or 10 years old with a matching ponytail — yelled, “MOM-MMMY!” with frexcitement in her voice. Then she darted into the street and threw her arms around the woman in blue and white. They hugged and didn’t let go, tripping-halfway running-staggering together. What a moment to be able to share.

I need a handler!
So yeah, I had a little tear burst when I crossed the finish line. Did you expect anything else?

After my initial frexcitement mellowed a bit, I realized a few things. (1) I didn’t know where my friend Jennifer was — and she was our welcoming committee and ride to breakfast. (2) Dave was still out on the course and would be for some undetermined amount of time. (3) I was kind of out of it and feeling really lonely. (4) I was FREEZING cold and didn’t have a jacket to put on over my sweaty running gear.

I wandered into the park, like a drunk trying to figure out what to do next. Port-a-pottie! I used the facilities, then rambled to the food tent. Is that the line? Or are they just standing there? Line looks to long. I’m not really hungry. I’m cold! Walked back through the park. I’m so cold. I wonder if I should be worried about how cold I am. Ate a PowerGel pack and tried to figure out what to do next. Maybe they have those silver blanket things at the medical tent. Will they give me one even if I don’t seem like there’s anything seriously wrong with me? Where is the medical tent? Found an information booth and was pointed to the medical tent back at the finish line. Do I need medical attention? No, I’m just cold. Sat in front of the heater for 5 minutes. Aaaaaaah… warm now. Wandered back out into the finish line area to go to our predetermined meeting spot: the bus stop at 15th and Trinity…

Jennifer = Angel
I found her! My angel! Jennifer. I talked a mile a minute about the race and stretched and just generally felt better. I wasn’t all alone! I was with Jennifer! Then we heard the announcer say, “David Humphreys” and turned just in time to see Dave run across the finish line, arms overhead, smiling, looking as happy as I’ve ever seen him. I ran (yes! ran, on my noodle legs) to the finish line, threw my arms around his heaving middle (poor guy, still huffing-and-puffing after all that running), buried my face in his chest, and promptly burst into tears. We stayed like that for quite a while, then I dried my eyes, and we both started talking at once.

Jennifer the angel stood patiently by, held our junk while we posed for pictures, then manuevered us to a quiet corner so she could get her car. Her car! Warm, soft, seating. She chauffered us to our house so we could change into dry clothes, then the three of us went to Habanero for chips & queso and eggs and guacamole and coffee and stories about athletic triumph.

Have I mentioned that Jennifer is training for an Ironman Triathlon? Or that she’s encouraged me at Weight Watchers every Saturday since I joined in 2004? Or that I think she’s just the cat’s meow? She’s all of those things and more. I wish you all a Jennifer in your life.

So that’s the story of my first half marathon.

On February 15, we’re doing it all again. But the Austin Half has hills, so I’m starting to get ready for that: more CrossFit workouts, a hill-running session or two, and Dave’s voice in my noggin, reminding me, “You love running hills.”

You know what? I do!

Dave and I have a thoroughly delightful 19-year-old niece named Pepper, and her recent visit to Prague coincided with a snowshoeing trip to Sněžka, a peak on...

Even though I don't do Crossfit anymore, I still think of my workout as a WOD. Giving something a name or title assigns it with...