These Are A Few Of My Favorite Things: Social Distortion

Also a favorite? Acting like a 17-year-old… which I will be doing for the next four days, minus a 2-hour chunk of time on Friday morning when I have to wear grown-up clothes and do a presentation at a client meeting.

Can you even? A client meeting! In the middle of Social Distortion Weekend!

But I’m getting ahead of myself.

First, listen to this while you read my rant below:

So… Social Distortion. My favorite band on the planet… so much my favorite I can’t talk about it because I sound like an idiot.

Next time you see me in person, just say, “Social Distortion, huh?” and see what happens. That articulate girl you know with the sizable vocabulary and higher-than-average sense of responsibility? She’ll disappear.

1999
The Social D Problem™ started with a Mike Ness Problem® in 1999, when Mr. Mike Ness released his solo album Cheating At Solitaire

. That was the first time I saw him live. That first show was so good, I ultimately went to nine more that year, dragging each of my friends along in succession. One night in San Francisco, my friend Mary and I hung around the backstage alley with a bunch of teenagers to get an autograph and a photo. I’m not sure I spoke, I was so nervous. 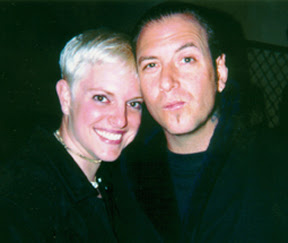 It only got worse (or better, depending on one’s perspective) from there.

. I was up to my elbow pads in Roller Derby, and a contact at Austin’s 101X got me into an acoustic show at the station. Mike drank herbal tea; girls swooned. When I finally got the chance to talk to him, I was so overwhelmed, I burst into tears. Mike looked me right in the eye and said, “That’s OK. I was cryin’ when I wrote them.” 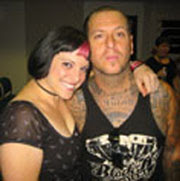 2005
Social D is relentless when it comes to touring. In 2005, they were back on/still on the road. I saw them in New York – the night before the meeting with Simon & Schuster that lead to my book being published. It was a surreal night. Dave and I had cocktails first at a rotating bar high over Manhattan, then sang along to the Clash while we waited for the show to start (“What are we gonna do now…”). I felt like I was made out of static energy, all optimism about my book and infused with the power of rock and roll. When Mike said later in the show, “This song is for all the dreamers…” I felt like it was just for me. The next morning, I started the path to published author. MAGIC!

There’s a chapter in my book about my Social D adventures, and back in Austin later in the year, I gave Mike an advance copy and begged him (yes, embarrassingly, begged) to give me a pull quote for the cover. No dice, but we did get another photo together to add to the collection. 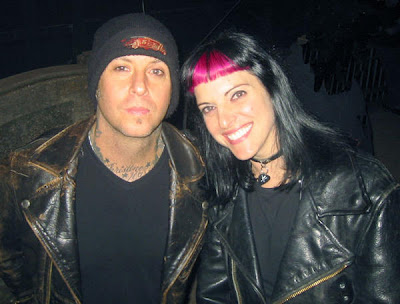 2007
My book hit the shelves, then I had rotator cuff surgery, retired from Roller Derby, married my true love, started CrossFit – I don’t know what Mike was up to… he didn’t say. But Social D was still part of my world. Note the logo on the sweatshirt… 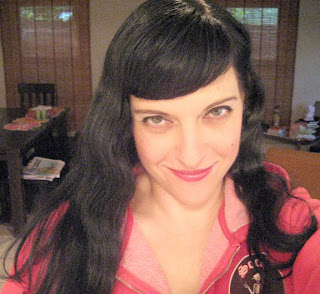 And my photo for a magazine interview… 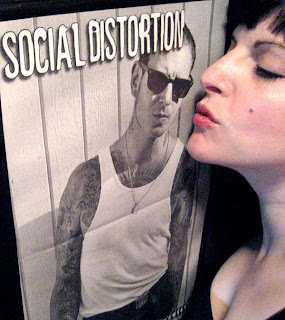 To “celebrate,” I took a week off from work, went to the beach, and hit the road to see Mike Ness on a solo tour in Houston and Dallas. (By the by, I cannot caution you strongly enough that despite what Texans will tell you, Port Aransas and Corpus Christi are not “awesome” nor are they “pretty.” Do. Not. Believe. The. Lies.)

Anyway, back to the stalking music.

Our friend’s band was the tour opener and in Dallas after the show, we had drinks and caught up in the bar. The next day, on our way to Houston, we saw our friend’s tour bus parked on the shoulder of the freeway – with a cop car. Use your imagination to conjure up a drab police station, a passionately disinterested court clerk, and a bail bondsman with thick gold bracelets and wrap-around sunglasses. I dug into my bank account, signed some forms, and the guys were sprung! We helped divide the band’s gear among an SUV and my car, stuffed extra band members into all available seats while I hovered over the shifter, and drove at unsafe speeds to the venue. We got the band there just in time for their set up.

In gratitude, my friend’s bass player gave us his backstage passes (win!) and after the show, I got the setlist. (Double-win!) I also had the pleasure of telling Mr. Mike Ness I bailed his opening band outta jail. I still have the bails bondsman’s card, should any of y’all need assistance… 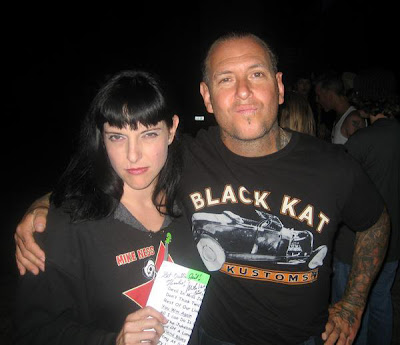 It’s worth noting that I was devastated that I had to go to the show in my traveling outfit of jeans and sweatshirt instead of the incredibly cute, pin-up girl outfit I had planned. Sometimes bailing a friend out of jail needs to trump fashion.

2010
So, here we are. Social D signed with Epitaph this year and has a new album dropping on January 18. The first single “Machine Gun Blues” is available on iTunes, and tomorrow night, they’ll be back on the stage at Stubb’s. I’ll be in my usual spot: the front row, right in front of the mic stand, channeling my inner 17-year-old and hoping the crowd surfers will avoid kicking me in the face.

Friday morning, dressed in grown-up clothes, I’ll be at the airport by 6:00 a.m. to fly to Dallas… and Saturday night, I’ll be back in my leather jacket at rock-n-roll church with Social D at the House of Blues.

Pssst… wanna travel back in time? The Way Back Machine has archived my old site Chance McCoy. Here’s a review I wrote of Cheating at Solitaire in 1999.

As of today, there are just 50 days until Dave, Smudge, and I get on the plane to Prague! For now, I'm literally touching every...

I've gushed to you about my ridiculously awesome pal Hilah Johnson before — when she and I cooked up some vampire fighting pork stew for...