This is the first holiday that I’m not abandoning all of my good habits in the pursuit of tasty treats, so over the next few weeks, I’ll be sharing some of my favorite products and recipes with you, so you can be a holiday caveperson, too!

Before I started eating dino-chow, I had no sweet tooth. You couldn’t leave me alone with a bag of salty snacks (Run for your life, Baked Lays!) or a bowl of popcorn, but I was never too fired up about cookies and candy.

That’s all over now.

I don’t crave sweets, but when I do have a bite of cake or beg a nibble from someone’s cookie, the flavor EXPLODES in my mouth. It’s a really fun side effect of eating clean.

So I was pretty excited when I heard about Cavemen Cookies. They’re 100% paleo-friendly, they have a ridiculously adorable logo, and the company’s founder Stephanie seems like a wicked cool person. 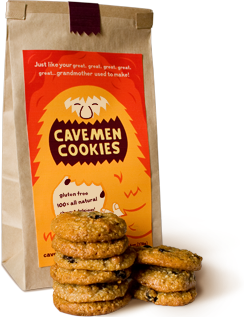 Before I chowed down on the cookies she sent me, I asked her a few questions. Here’s what she had to say…

How long have you been eating paleo? What was your inspiration to start?
I first learned about the Caveman Diet from a friend of mine six years ago. I hadn’t seen him in a while, and when he approached me on the street I was amazed at how great he looked – thinner, clear skin… almost glowing! He told me he’d started following the Caveman Diet. Given the obvious results, I followed it pretty strictly for the next year and a half, and enjoyed the results he did: I felt amazing and got enough compliments to suggest I looked that way too.

Interestingly enough, I was in England during the period that I was on the diet, and it was pretty easy to follow while I was there. It was much harder to follow when I returned to the U.S. – perhaps because I was busier, but also because it was difficult to find foods that didn’t have so many additives or non-paleolithic ingredients in them. I fell off the wagon for the next few years and only returned to the diet again in 2009 when my boyfriend reached an age benchmark upon which we’d previously agreed we’d return to caveman eating. We’ve been eating paleo ever since.

What’s your favorite caveman dinner?
To be honest, I’m a fan of eating simply, and I don’t cook extravagant meals. In addition to the cookie biz, I’m also a lawyer, so I typically don’t have much time to cook anything exciting. Usually I just want to satisfy my hunger with something simple. I like eating salads… I just throw a bunch of paleolithic ingredients together — like a waldorf salad with apples, celery, walnuts, dried cherries, lemon juice, and canola oil. This probably makes me sound like a terrible chef, but I do put more effort into the cookies!

Are there any challenges to being a cavewoman in New York? Seems like all the tempting restaurants and street food could be tricky.
New York is definitely not the easiest place to follow the Caveman Diet, but my boyfriend and I make occasional exceptions for dining out at nice restaurants, although we still avoid bread and pastas. Aside from the fine restaurants, though, I don’t find myself tempted by street food or other non-paleolithic treats. Once you start eating paleolithically, you get used to it and don’t crave processed foods as much as you used to. It’s almost as if your tastebuds learn to recognize grains as “fake” food. 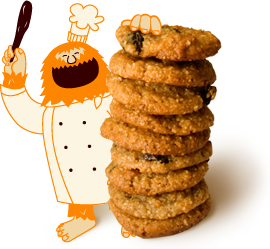 So that’s Stephanie. Cool, right? Let me tell you about the cookies!

They’re sweet and chewy and totally satisfying, and I didn’t feel “cracked out” the way I do when I eat traditional baked sweets. There are just a few moist, chewy raisins in each cookie, perfectly distributed so they complement the dough. The flavor of the cookie itself hints at almonds, but doesn’t taste like an almond cookie. Both the texture and taste reminded me of marzipan pine nut cookies (which I love!) that look like this:

Now onto the nutrition news. The cookies are (lovingly) made from honey, almond flour, walnuts, raisins, ginger, nutmeg, and cinnamon. Isn’t it nice that you can recognize the name of each ingredient?

Each cookie has about 65 calories, 3.5g of fat, 1.5g of protein, and 7g of carbohydrates… so they’re the carby equivalent of half an apple, give or take a pesky sugar gram or two… or 1/4 of a Larabar. Not bad for a sweet treat!

It’s not too late to order your own Cavemen Cookies for the holidays, and they keep for six months, not that you’ll be able to resist them for that long.