It was exactly a year ago today that I had the surgery on my thyroid to remove a nodule that could have been cancer. Now that I’ve got a year between me and the Frankenneck, I can tell you: during those few weeks last November I was more scared for myself than I’d ever been.

About 10% of the adult population has thyroid nodules, a lump that grows on an otherwise normal thyroid. My thyroid function was 100% – it just had a large growth. (Yuck!) Ninety-five percent of thyroid nodules are benign, but the larger the lump, the higher the risk for cancer. My doctor said that the nodule on my thyroid was quite large – it covered more than half of the small, butterfly-shaped gland – and recommended surgery to remove it and perform a complete biopsy. 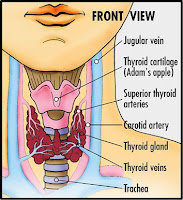 Even though thyroid cancer is generally considered treatable and relatively minor, it’s scary stuff to be sitting in an office and hear the C-word. I mean, I was normal one second, facing potential C-ness the next.

Clearly, it’s all worked out. The doctor removed two nodules – she found a second one hiding in there when she opened me up – and there was no cancer. The bills are paid, and Dr. Stierman is just an old entry in my phone address book. All I have to show for my adventure is the scar across the front of my neck.

I wish it wasn’t there, and some days, I wear a scarf because I just really don’t want to look at it. But mostly, I appreciate what I learned from the experience. When bad shit happens, we really can rise to the occasion, find some humor, and weather the bumps… which is not to say I hope I ever experience anything like that again! But it is good to know that once the initial shock and fear pass, bad news is like anything else we have to tackle: do some research, make a plan, follow the steps, and keep your friends and family close.

I Prefer Ultravox to Ultrasound: This is the post I wrote after the trip to my GP where I learned I might have something going wonky-donk with my thyroid.

Seven Double-Unders: The day I learned I had a nodule and had to have surgery (and maybe had cancer), I got a PR on double-unders. The universe has a wickedly appalling and wonderful sense of humor.

This is a really crappy hotel: My post from the hospital bed, just before my surgery.

The Reasons I’m a Bad Patient: My first post-surgery update. My sense of humor returned, along with a very swollen neck and ruined Thanksgiving plans.

Blame the Amoxicillin?: I had some trouble with the antibiotics; here’s what I learned about Amoxicillin.

Giving Fear a Workout: The monsters were gnashing their teeth at me for 24 days straight, but just about put them to rest with a run around the lake after my forced 10 days of rest.

Back at Bootcamp: And then I was back to my class, back to my routine, and back to planning new challenges for the future.

When last we left the riveting story of my ongoing adventures in functional medicine, it was August, and I'd just been to my first appointment...

It's been about three weeks since we all got "Here I Go Again" stuck in our heads. I don't have definitive news on what's happening...