These Are a Few of My Favorite Things: Muscles and Leopard Print

Smithsonian magazine has a fun article about Charles Atlas, the original 97-pound-weakling turned muscle man. You’ve surely seen the old-fashioned ads in the back of comic books and magazines. 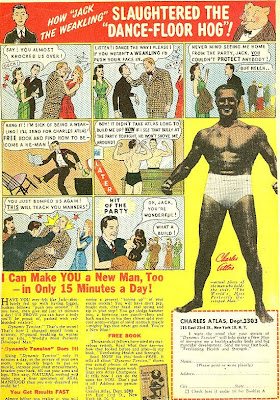 Atlas started out as the ridiculed skinny boy in the comics.

The man who made history marketing his muscles was an unlikely hero. Born in Acri, a tiny town in southern Italy, he arrived with his parents at Ellis Island in 1903 at age 10. His name was Angelo Siciliano, and he spoke not a word of English.

He didn’t look like much, either. Skinny and slope-shouldered, feeble and often ill, he was picked on by bullies in the Brooklyn neighborhood where his family had settled, and his own uncle beat him for getting into fights. He found little refuge at Coney Island Beach, where a hunky lifeguard kicked sand in his face and a girlfriend sighed when the 97-pound Atlas swore revenge.

He slowly learned how to exercise and built up his body, then he started selling that idea to others and helped re-shape how men thought about their physiques. During the Depression, he proposed the idea that a way out of the mental depression of the rough economic times might be taking control and care of one’s body.

He was also a master at promotion.

There are innumerable photos of Atlas hoisting bathing beauties or horsing around with boxers Max Baer and Joe Louis and golfer Gene Sarazen. He seemed to delight in publicity stunts… He leashed himself to a 145,000-pound locomotive in a Queens railroad yard and towed it 112 feet. He entertained inmates at Sing-Sing (prompting the headline “Man Breaks Bar at Sing-Sing—Thousands Cheer, None Escape”). To protest an office dress code, he encouraged all the women on his staff to wear shorts to work in the summer. Then he appointed his private secretary president of the Long Live Shorts Club.

And he looked damn fine in leopard print.

Read the article Charles Atlas: Muscle Man. Be sure to browse the Photo Gallery in the middle of the page.

Flip through this photo gallery of Bodybuilders Through the Ages

As of today, there are just 50 days until Dave, Smudge, and I get on the plane to Prague! For now, I'm literally touching every...

I've gushed to you about my ridiculously awesome pal Hilah Johnson before — when she and I cooked up some vampire fighting pork stew for...