Travel back in time with me to March 2008. It was my third time EVER attending a UTB, and box jumps were on the menu because we were doing a mini Fight Gone Bad.

I distinctly remember finishing up the first round of wall ball and moving toward the box jump station. I walked right up to the 20-inch box—which I’d never seen before—and stared at it, slack-jawed.

Jeremy materialized at my side and said something like, “What are you doing, Mel?! Go over there…” and pointed me toward the 12-inch box. I was flooded with both relief (Thank god I didn’t have to jump on that thing.) and disappointment ([kick the dirt with my toe] Damn, I wish I could jump on that thing.) 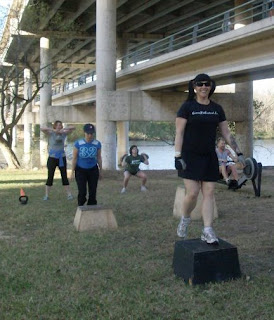 I went home that day, wondering how on earth I would ever learn to jump on a box that was more than half as tall as the inseam on my jeans (29″, if you must know). And while I simultaneously fretted I’ll never be able to do it I was hatching the plan to learn how to do it.

When the Spartan 300 muscled its way into my consciousness in May, box jumps were again my nemesis. Throughout the benchmark workouts over the summer, I slowly made the little box taller with weight plates, but I was still too intimidated to even attempt jumping on the 20-incher. 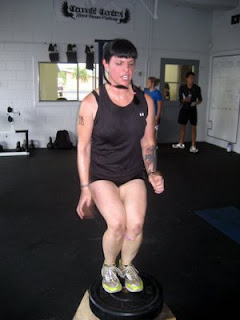 I’d look at it from across the room and think, It’s not so bad. I can do it!

But every time I got close enough to actually jump, I chickened out. I can’t, I thought, paralyzed by visions of entangled toes and smashed shins and cracked teeth.

Take it from me, dear friends. once I’ve had the thought, “I can’t,” it’s pretty much all over.

It bugged me that I couldn’t make myself try, but the annoyance with myself—letting fear stop me… grrrr!—really came home to roost in September when it was time to sign up for Fight Gone Bad. I was sure I could deliver an un-embarrassing performance on the elite weight except for one thing: I couldn’t jump on the 20-inch box, and I didn’t want to scale the workout.

So I signed up for the intermediate level because it allowed me to replace box jumps with step-ups. 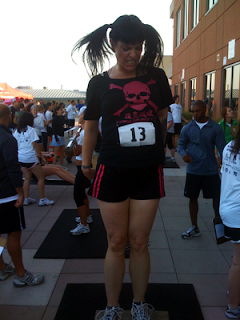 It ultimately turned out to be a great day for me, but I was determined that by Fight Gone Bad 2009, I’d be doing the elite level weight and jumping on the 20-inch box.

Fast forward to this January. I bought some plyo boxes for my backyard so I can practice my pullups, so I’ve been jumping on the 18-incher just about every time I walk through the yard. Ten or 20 box jumps here and there… and then for fun, 10 step-ups on each leg on the GIGANTIC 24-inch box.

A few weeks ago at Bootcamp, I decided to do my box jumps on the tallest part of the stone wall in the park. Things were going great and then BLAM! I ate it. Hard.

Skinned my right shin, bruised my left palm… it was the box jump nightmare come true. What was painful in my imagination turned out to be mostly annoying and embarrassing and—truth be told—kind of a relief in real life. FINALLY I could stop being afraid of wiping out on the box jump.

And you know what? It wasn’t so bad.

Sure, I still have a red scar on my right shin, but I wear that thing like a badge of courage. I’m looking at it through my fishnets right now. Hello, little reminder of how I used to be scared and now I’m not.

So… this morning this was our workout:

All through the first round of snatches, all I could think about was the box jumps (which probably explains the bruises on my forearms from not totally paying attention to those damn snatches.) I knocked out my reps and dropped the kettlebell to the floor.

I glared at the box.

The theme music from “The Good, The Bad and The Ugly” played in my head.

I swaggered over to the 20-inch box and stared it down.

Then I took two baby steps to the right… and did five warm-up jumps on the 12-inch box with a weight plate on top of it.

But then… the music played in my head again.

Before I could think about it too much, I took two steps to my left so I was in front of the 20-inch box. I swung my arms and tensed up and kinda rolled up on my toes and… nothing. Chickened out.

No music. No swagger. No glare.

I took a breath, swung my arms, and… ploop. Landed on top of the box.

And that was it. I did it four more times and moved on to my lunges, grinning like an idiot all the way through. I did the rest of the rounds, jumping on all of them, and I never felt nervous about it again.

My overall time was an unimpressive 15:31. I was kinda slow on the kettlebell snatches and my lunges might have gotten a little wobbly there at the end. Whatever.

I wonder if I can conquer the 24-inch box by this time next year?

Saturday morning, I woke up in just enough time to squeeze in a little Backyard Workout before heading off to Hatha Star yoga. Even though...

My relationship with box jump started out pretty wobbly. But eventually, I conquered my fear of them, and jumping on stuff became one of my...