In each issue of Paleo Magazine, I share the history of a traditional recipe and adapt it to fit into a healthier paleo lifestyle. This time, we’re demystifying the many definitions of the word “curry.”

The Complexity of Curry

When I was growing up in rural Pennsylvania, the only frame of reference I had for curry was the astringent yellow powder in the McCormick jar that we used in my mom’s Country Captain Chicken recipe. When I went to college in Syracuse, New York, I learned all about vindaloo and tikka masala at the local Indian restaurant. And then, finally, when I moved to San Francisco in the ’90s, I was introduced to Thai curries, which, surprisingly, weren’t yellow at all.

It was all very confusing. And it’s no wonder! Curry — from kari, the word for sauce in the Tamil language of Southern India — actually represents at least three distinct things: an herb, a spice powder, and a meat-and-vegetable (or just vegetable) dish that can be either “dry” or “wet.”

Let’s take them one at a time.

Curry leaves are from an herb that grows in South Asia. Paradoxically, curry leaves are not used in curry powder, but they are an integral ingredient in some South Indian recipes.

On to curry powder. According to lore, the bright yellow spice blend that most of us associate with curry was probably first prepared by 18th century Indian merchants so members of the British Colonial forces, returning to England, could recreate Indian dishes in the comfort of their manor kitchens. (Or, more accurately, so their servants could recreate them.) Today, commercial curry blends are usually heavy on turmeric, hence the golden color, and also include cumin, coriander, cinnamon, cardamom, and chile peppers.

A curry dish can be either “wet” — with a rich sauce or gravy made of yogurt, coconut milk, or stock, like the curries found on your favorite Indian and Thai take-out menus — or  “dry,” a dish more like a stir-fry in which a small amount of liquid is allowed to evaporate so the spices coat the other ingredients. These dry curries are popular in Japan and also the ubiquitous Balti curries of Birmingham, England.

According to historians and researchers, curries that included garlic, ginger, and turmeric have been eaten for about 4000 years. The earliest known recipe for meat cooked in a spicy sauce was written in cuneiform on stone tablets in Mesopotamia around 1700 B.C. It described a meal that was most likely an offering to Marduk, a Babylonian god associated with water, vegetation, judgment, and magic.

The first curry recipe written in English was published by Hannah Glasse in 1747, and about four decades later, the first commercial curry powder hit the market, making it easier for home cooks to prepare the exotic, aromatic dishes for their families.

Curry became so popular in England, it was celebrated by Victorian novelist William Makepeace Thackery in his 1846 “Poem to Curry.” Here’s a tasty excerpt:

She pops the meat into the savoury stew,
With curry-powder table-spoonfuls three,
And milk a pint (the richest that may be),
And, when the dish has stewed for half an hour,
A lemon’s ready juice she’ll o’er it pour.
Then, bless her! Then she gives the luscious pot
A very gentle boil – and serves quite hot.
PS – Beef, mutton, rabbit, if you wish,
Lobsters, or prawns, or any kind fish,
Are fit to make a CURRY. ‘Tis, when done,
A dish for Emperors to feed upon.

Because it’s the result of culinary cross-pollination, there’s no single, definitive type of curry. After the year 1000, Muslims brought their meat-centric cooking traditions toward the West. At the same time, Indian traders incorporated exotic spices from Southeast Asia into their cooking. When Portuguese traders set up shop on the west coast of India in the 16th century, they added chile peppers from the New World to the curry pot. Now, most countries in Southeast Asia have their own version of the dish. From Nepal to Sri Lanka, Indonesia to Thailand, and Burma to Japan, curries are part of the local cuisine. The colorful, spicy powder has even made its way into French cooking and transforms a classic béchamel into sauce au curry.

The coconut curry recipe I developed for you draws on several curry traditions. It features a spice blend inspired by Indian curries, combined with the coconut milk, basil leaves, and lime usually associated with Thai dishes. The result is a spicy sauce that packs just a little heat, and is rich, creamy, and easy to adapt to your personal preferences.

I used shrimp in this recipe, but chunks of salmon fillet or a nice white fish like cod or halibut are delicious, too, as are thinly sliced chicken breast or pork loin. To change up the flavor, you can also replace the basil with cilantro.

This curry is scrumptious served over roasted sweet potatoes or on a bed of cauliflower rice. Here’s an easy, delicious recipe for Oven-Roasted Cauliflower Rice!

Place in serving bowls and sprinkle with a squeeze of fresh lime juice. 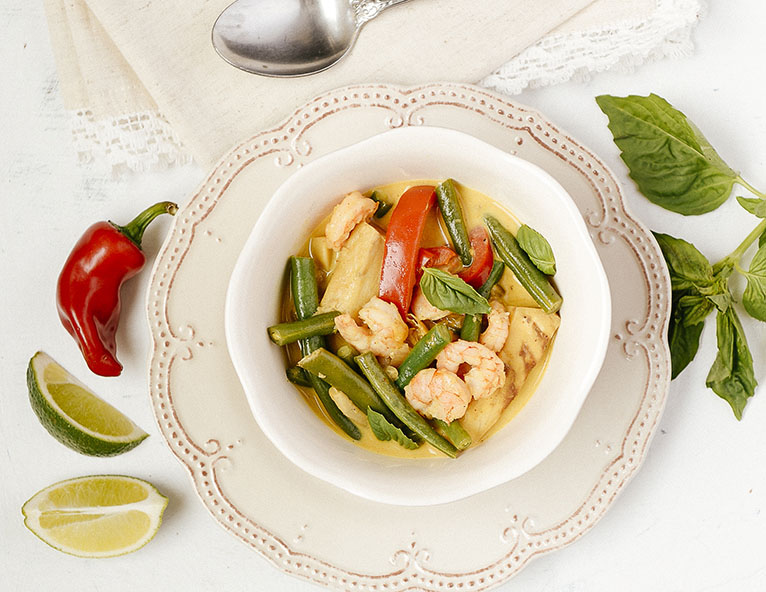 Heat the coconut oil in a large, non-stick skillet over medium heat, about 2 minutes. Add onion and cook until softened, about 7-10 minutes. Add the garlic and spice blend to the onions and stir until fragrant, about 30 seconds.

Pour the coconut milk and fish sauce into the pan and stir well to combine. Add the eggplant, bell pepper, green beans, and jalapeño. Reduce heat to medium-low, cover and cook until the vegetables are almost tender, about 10-15 minutes. Add the shrimp or chicken and basil leaves, then cook covered—5 minutes for shrimp, 7-10 for chicken.

Place in serving bowls and sprinkle with a squeeze of fresh lime juice. Awesome on a bed of Oven-Roasted Cauliflower Rice.

As y'all can probably tell from my devotion to cumin, I love earthy, warm, spicy-sweet piles of food. I found a recipe for coconut curry...