In each issue of Paleo Magazine, I share the history of a traditional recipe and adapt it to fit into a healthier paleo lifestyle. This time, we’re off to India for a taste of masala and history.

The Gem of Punjab

In the 1920s, when India was still part of the British empire—and hadn’t yet been partitioned into Indian and Pakistan—an enterprising Punjabi named Kundan Lal Gujral opened his restaurant Moti Mahal, the “Palace of Pearls.”

To give his customers something new, Gujral marinated chicken in yogurt and spices, then cooked it in the tandoor, a clay oven traditionally used to bake the breads known as naan. Shaped like a bell and stoked with wood or charcoal fires that generated 900-degree Fahrenheit heat, the tandoor produced chicken that was crisp on the outside, slightly smoky, succulent, and tender.

According to lore, Jawaharlal Nehru, the Prime Minister of India, so enjoyed the tandoori chicken at Moti Mahal, he made sure it was always on the menu when he visiting dignitaries. The Who’s Who of those tandoori chicken feasts includes defining personalities of the twentieth century, including Richard Nixon, the Shah of Iran, Nikolai Bulganin, Nikita Khrushchev, JFK, and First Lady Jacqueline, who reportedly requested the recipe.

Tandoori marinade—made with a creamy yogurt base—is seasoned with a masala spice blend that’s spiked with cayenne and chili powder. Tandoori chicken made the traditional way turns a fiery red, thanks to Kashmiri chili powder, and when a chef is generous with turmeric, the chicken takes on an orange hue.

In 1947, India was partitioned and the British returned to their chilly isle, taking tandoori chicken with them. A quick Google search reveals that restaurants named in honor of the original Moti Mahal can be found all over the U.K. and former British territories. Tandoori chicken’s cousins—butter chicken and chicken takka masala—are ubiquitous in curry shops around the world.

To make a paleo-friendly version of this classic, I replaced the yogurt with coconut milk, but kept the fragrant spices. Since you probably don’t live in a village with a tandoor oven available, I’ve provided instructions for how to cook the chicken in your home oven and on the grill. The cauliflower rice is a sweet balance to the spicy chicken, and the chutney is both cool and piquant. 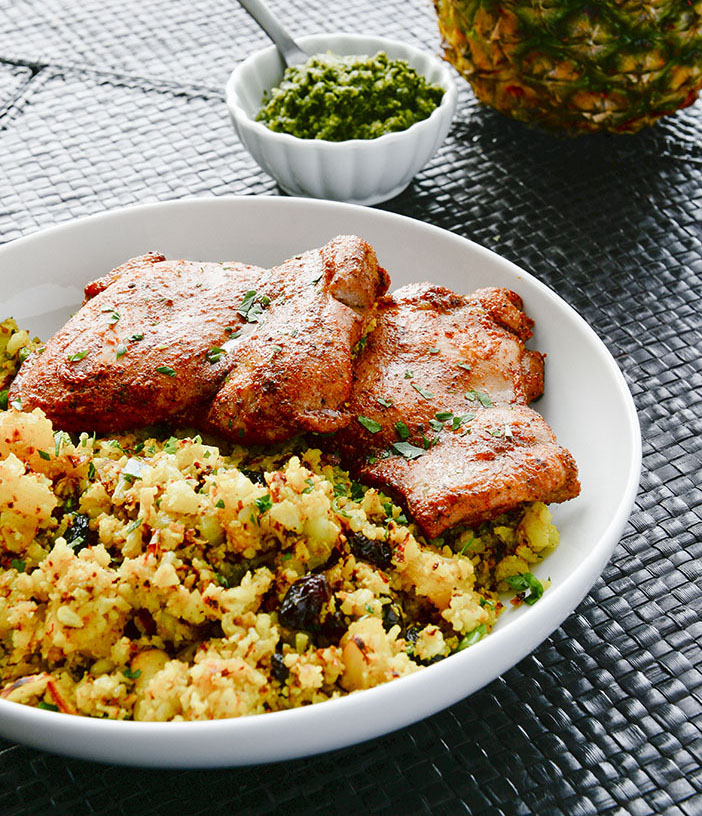 In a large bowl, mix everything except the chicken. Place the chicken in a large food storage bag and pour in the marinade. Seal and squish around so the chicken is coated. Marinate in the refrigerator for a minimum of 2 hours or up to overnight.

To roast: Preheat oven to 425F. Cover a large baking sheet with aluminum foil and place a wire rack on top. Arrange the chicken in a single layer on the wire rack and roast 20-30 minutes until starting to brown and cooked through.

To broil: Preheat broiler. Place the chicken on a broiler pan and broil, about 5-6 minutes per side, until starting to brown and cooked through.

To grill: Preheat the grill on high with the lid closed until very hot, about 10-15 minutes. Grill the chicken, covered, 5-6 minutes per side, until starting to brown and cooked through.

Combine all the ingredients in the bowl of a food processor and purée until smooth. Be glad you have a nose; your house will smell awesome! Place in fridge for about an hour before eating. This will taste fresh and delicious for 3-4 days.

Break the cauliflower into florets, removing the stems. Place the florets in the food processor bowl and pulse until the cauliflower looks like rice, about 10 to 15 pulses.

Cut the pineapple chunks in half. In a very large bowl, mix the riced cauliflower, pineapple chunks, scallions, almonds, and raisins. In a small bowl, place the coconut oil, curry powder, and salt. Microwave until the oil is melted, about 20 seconds, mix, and pour the oil over the cauliflower. Toss with a rubber spatula until the veggies are coated in the seasonings. Spread the rice evenly on two large, rimmed baking sheets. Roast 15 minutes, then stir the veggies, spread flat again, and return to oven for 10 minutes. Pour the melted ghee over the rice and stir to coat.