Dave and I had a lovely Thanksgiving filled with delicious food, naps, getting to know the kitty that recently adopted us, and spiffing up our house with a fresh coat of paint. If you don’t want to sully your image of me by reading about my food-related debauchery, you might want to just look at our smiling faces, the new kitty Smudge, and move on. 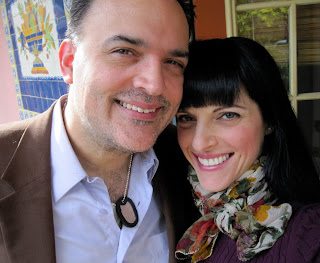 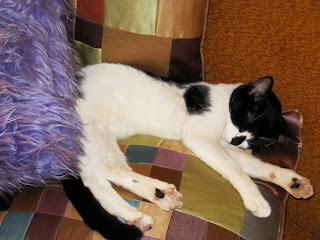 If you’re still here, hold on tight and join me for a romp through my non-dino adventures…

I enjoyed a fair amount of indulgence on Thanksgiving, and I savored every bite. At Trio, I ate paté and crackers; turkey with cornbread stuffing under it – and gravy and cranberry sauce drizzled over it; slivered red cabbage that was surely sauteed in butter (made from cream!); and tastes of many different kinds of dessert. 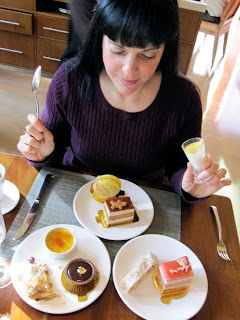 Seriously. I had about three bites of each of those. My favorite surprised me: the Passion Fruit Macaroon seen below. It definitely involved some marzipan and was held together with butter-and-sugar spackle. I love white frosting! 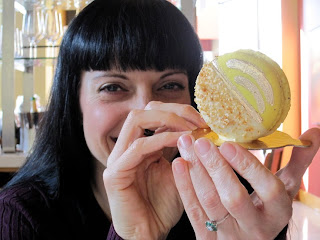 I’m not too proud to admit that after dinner, Dave and I took a brief stroll by the lake that was cut short by my inability to breath around my “snake that just ate a goat” tummy. I went immediately home and got as flat and as still as possible on the bed until my torso returned to normal.

After a nap, I broke into the Bacon Bourbon Brownies. They were decadently rich and satisyfing. I ate them in 1-inch cubes… on Thursday and Friday… and Saturday. Then I gave the remaining half-pan away to friends and got back on the veggie train. (Mmmm. Bok choy and beet tops and spinach and kale.)

Should you decide to follow in my salty-sweet, hedonistic foosteps, the recipe for the brownies is below, along with some lessons I learned along the way. 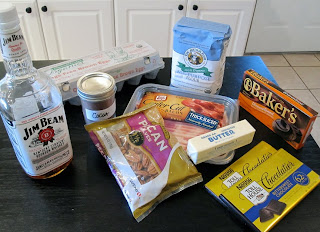 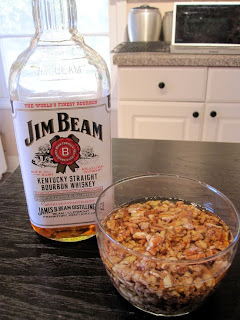 Melding the melted chocolate with the sugar and eggs. 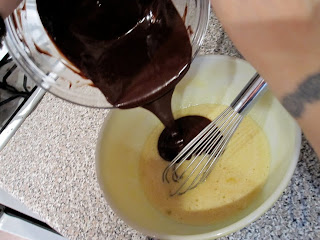 Batter in the pan, ready-to-go. 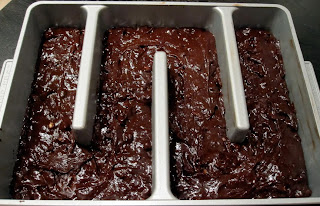 Fresh from the oven. 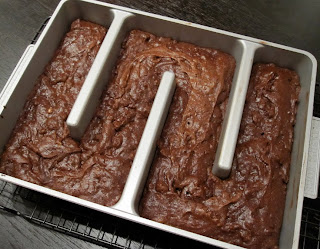 NOTE: All recommended brands listed below are based on extensive research through past issues of Cook’s Illustrated to find the recommendations from their test kitchen for chocolate and bacon. The concept for the recipe is taken from a Slashfood post; the technique and basic brownie ingredients are straight from Cook’s Illustrated‘s “Chewy Fudgy Triple-Chocolate Brownies.”

The original recipe included smoked salt and pepper, which I left out because they sounded too bacon-y; I might try them next time. My resulting brownies did not taste strongly of bacon, but were very rich, chewy, and flavorful. 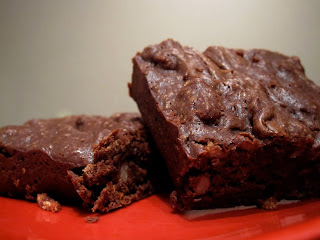 Cover a baking pan with aluminum foil. Place bacon in a single layer on the baking sheet. Bake 6-7 minutes, then rotate the pan 180-degrees. Bake an additional 4-7 minutes, or until very crispy. Drain bacon on paper towels and set aside to cool. When cool, chop to desired crumble size. I chopped mine to about a 1/8-inch mince because I wanted some bacon pieces, rather than bacon dust. Ditto for the nuts.

When about half the bourbon has been absorbed by the pecans, use a slotted spoon to transfer them to a baking sheet. Keep the bourbon! Spread the pecans in a single layer and toast them in the 350F oven for 7-10 minutes. Reserve one teaspoon of the bourbon and drizzle the rest of the bourbon over the pecans. Roast an additional 5-10 minutes until they’re toasty brown and are glazed with the bourbon. Set aside.

Spray an 8-inch square baking pan with non-stick spray. You can also use a Baker’s Edge pan if you like brownie edges. I like the edges a lot, so I tried the Baker’s Edge pan. Next time, I think I’d go for the traditional square pan to preserve more of the molten fudginess.

In a medium heatproof bowl set over a pan of almost-simmering water (or a double-boiler), melt the chocolates and butter, stirring occasionally until smooth. Whisk in the cocoa until smooth. Set aside to cool.

In a medium bowl, whisk together the eggs, sugar, vanilla, salt, and reserved teaspoon of bourbon. Mix until combined, about 15 seconds. Whisk the warm chocolate mixture into the egg mixture, then stir in the flour with a wooden spoon until just combined.

Gently fold in the nuts and bacon. Pour the mixture into the baking pan, using a spatula to smooth and spread into the corners.

Bake until slightly puffed and a toothpick insered in the center comes out with a small amount of sticky crumbs clinging to it. THIS IS IMPORTANT! For an 8-inch pan, that’s about 35 to 40 minutes. For a Baker’s Edge pan, it’s only about 15-20 minutes. (I baked for 20 minutes and next time, I will definitely check the oven at 15. I would have liked them a little more fudgy-textured.)

Cool on a wire rack in the pan for about 2 hours. Cut into 1-inch squares. Do not cut brownies unitl ready to serve; uncut brownies can be wrapped in plastic and refrigerated up to 5 days.

Note: My dad and I strategized a bit on the recipe, and based on our conversation, I sprinkled the nuts and bacon on top of the batter, rather than mixing them in. FAIL! The crumbles didn’t stick and the flavors didn’t meld. I also overbaked that first batch. FAIL! An entire pan of almost-right brownies were aborted and I started all over again. Words to the wise: Keep an eye on the clock and a toothpick handy. You really want the brownies kinda smushy when they come out of the office to ensure a fudgy center.

My final words: These suckers are delicious! And rich. So go easy, friends, and enjoy every bite.

Although I'm a curmudgeon when it comes to hot weather, I'm not against all things summer. I like splashing in the pool. I love cooking...