Don’t get me wrong: my infatuation with my Zone food is not waning. I missed my veggies and almonds quite a bit last week when my stomach couldn’t handle more than overcooked pasta and mushy banana.

But if my Zone food list and I were dating, we’d be at the point where I want to deepen our relationship and move past the superficial to something more meaningful, more rewarding, more daring.

So yesterday I bought a new Weight Watchers cookbook for fresh inspiration, and I decided to start exploring some of the other options in the produce department. I’ve been eating sautéed yellow squash, zucchini, french cut green beans, and broccoli for months. There’s an impressive array of dark green and yellow and orange and purple produce out there — and the richer the color, the healthier it is.

Today, I’m learning about kale. Are you excited? 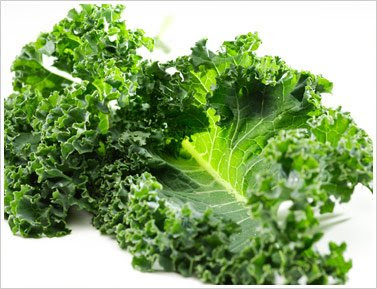 According to Wikipedia, kale is apparently the rebel of the cabbage family: it’s “closer to wild cabbage than most domesticated forms.”

And like any self-respecting bad boy, kale has a checkered past and international reputation:

Until the end of the Middle Ages, kale was one of the most common green vegetables in Europe.

Kale was introduced into Canada (and then into the U.S.) by Russian traders in the 19th century.

During World War II, kale was a popular vegetable in Victory Gardens — cultivated in backyard plots in the U.S., Canada, and the U.K. to contribute to the food supply during WWII — because it’s easy to grow and provides so many important nutrients.

In the Netherlands, kale is mixed into mashed potatoes to make stamppot — and the traditional Irish dish colcannon is also a combo of kale and potatoes.

In southeastern Africa, kale is boiled with coconut milk and peanuts, then served with rice.

In Scotland, the Scots dialect word for kale is synonymous with food and to be “off one’s kail” is to feel too ill to eat.

But the Germans may win the kale competition because they crown a “Kale King” as part of the Grünkohlfahrt (“kale tour”) which involves visiting country inns in Bremen and Oldenburg to “consume large quantities of kale, sausage, and schnapps.”

I recently ate kale sautéed with sesame seeds at a restaurant, and it was ridiculously tasty, so I bought a bunch yesterday and surveyed my pals about how to cook it. The general consensus was to steam sautée it and gobble it up.

If you want more of a recipe than that, here’s a modification of one from Bobby Flay at the Food Network that I’ll be using tonight:

Heat olive oil in a large saucepan over medium-high heat. Add the garlic and cook until soft, but not colored.

Raise heat to high, add the stock and kale and toss to combine. Cover and cook for 5 minutes.

Remove cover and continue to cook, stirring until all the liquid has evaporated. Season with salt and pepper to taste and add vinegar.

NOTE: I’m thinking that adding some sliced black olives at the end would be a tasty way to get some additional healthy fat into the mix.

I’m also interested in this recipe for Kale Salad with Tamari Roasted Almonds from the blog I Heart Kale, a year-old site bursting with tasty-sounding, sometimes-odd, but healthy-looking recipes.

Tonight for dinner at our house, we’re having Moroccan pork chops, sautéed kale, cucumber salad, and almonds, with strawberries for dessert. (Are they among the last sweet berries of the summer?) I’ll let you know in the a.m. how it turned out.

Don't get me wrong: my infatuation with my Zone food is not waning. I missed my veggies and almonds quite a bit last week when...

Bok Choy! It's the more exotic, less stinky cousin of my ol' favorite cabbage. If it was a character in a noir film, it would...